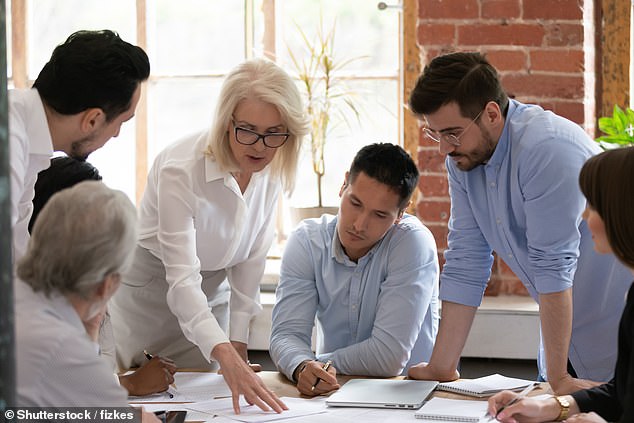 Male students expect to be paid 9.7% MORE than women in their first job

Men don’t just get higher wages – they expect it too: Students expect to be paid 9.7% MORE than women in their first job after college, study finds

By Ryan Morrison For Mailonline

Male students expect to be paid about 9.7 percent more than their female counterparts when they start their first job after college, researchers found.

Students, both men and women, have optimistic salary expectations when studying, compared to the actual average salaries of graduates, but men expect to earn more.

The pay gap between men and women is a well-established phenomenon in the labor market, and the team from the University of Friborg in Switzerland wanted to know why.

They interviewed 865 students at universities in Switzerland about the workplaces they hope to work in after graduation, expected salary and personal details.

The researchers found that when they received information about the real wages they could earn, women lowered their expectations, but men raised them.

Male students expect to be paid about 9.7 percent more than their female counterparts when they start their first job after college, researchers found. Stock image

This was when it was calculated without any other factors such as career choice or lifestyle prospects such as a break for the kids.

They don’t give any explanation as to why expectations in college seem to impact actual pay differentials in the workplace, just let it happen.

Some evidence of a gender pay gap may be explained by job paths taken by one gender or another, the team explained, and that job is higher paying.

Their survey of students from several universities also covered general demographic information, the type of job they hope to have after graduation, their expected salary after graduation and three years later, as well as the hopes of a future family.

They also asked students if they would work full time or part time if they had children, where they wanted to live and for some students, showed them a bar graph with information on actual monthly gross income for the sector of their choice.

Interestingly, for the students who received the additional bar graph of gross income information, the male students actually increased their expected average salary.

Students, both men and women, have optimistic salary expectations when studying, compared to the actual average salaries of graduates, but men expect to earn more. Stock image

Contrary to this, female students, given the same information on real wages, tended to reduce their average expected salary to approach the real figure.

They found that a statistically significant direct and unexplained effect of gender on salary expectations persists in most cases according to several statistical models considered.

“We find that a large set of personal and professional checks – collected in an own survey of two Swiss higher education institutions – largely explains these differences in gender expectations in most of the empirical specifications.”

The results were published in the journal PLOS ONE.

WHAT IS THE GENDER COMPENSATION GAP

On average, men working in the UK earn between 9% more than women in the same occupation, according to figures released by the Office for National Statistics.

Data shows that public sector staff still earn a higher average salary than those in the private sector – earning Â£ 599 per week compared to Â£ 532.

The overwhelming majority of professions tend to pay more men than women.

And research in October 2017 showed that only three jobs have no gender pay gap at all – bar staff, medical and dental technicians, and waiters.

Since April 2018, all employers with more than 250 employees are required by law to publish their pay gap between men and women online.

Comments from the Trade Union Congress (TUC) indicate that women work mostly for free for the first 67 days of the year.

Justine Greening, Minister for Women and Equality, said: â€œClosing the gender pay gap is the key to building a stronger economy where everyone plays by the same rules.

“It just makes good business sense to recognize the enormous potential of women and take action to nurture and advance female talent.”

She added: â€œI am now calling on employers across the country to publish their gender pay gap. They have until March 31 to do so.

â€œBy highlighting the gaps, employers can take action and ensure that we are harnessing the talents and skills of both men and women. ”