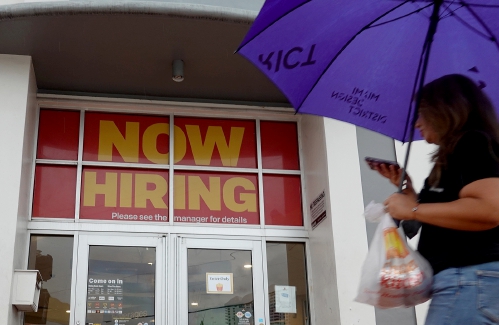 Take this job and do it

Last spring, Republican governors in a dozen states, including New Hampshire, prematurely ended additional unemployment benefits of $300 a month, paid for by the federal government’s stimulus program. Republicans claimed the bonus made workers lazy, encouraging them to play video games rather than go to work.

Several reputable studies prove the Republicans wrong. Some employees stayed home to care for their children, while others feared catching COVID. Others refused to return, not because they wanted to skip school, but because they hated their jobs and were looking for something better.

The federal stimulus program is now long gone, but people are still quitting in droves. It makes headlines and piles of articles and books are written about it. Why do people still give up? Unsurprisingly, the lowest paid workers leave most often. Their jobs are ones that tend to be dead ends with no benefits: repetitive, boring, and sometimes dangerous.

A series of self-help books have sprung up claiming to solve the problem, usually by advising readers to reinvent their lives during their off-work hours. These books may help upper-middle-class people who have the financial resources and free time to pursue new hobbies and passions, but these rosy scenarios are pie in the sky for most working people because they last from long hours, often at two or more jobs. , struggling just to get by.

This refusal is not the result of individual laziness, but reflects longstanding American policy decisions that cripple the average worker. It is a fact that the voices of poor and low-income people, over 40% of our population, have been silenced in the national political conversation. Unsurprisingly, studies show that workers are happiest in countries, like Western Europe, that offer a generous safety net: universal health care, childcare, social assistance and secure retirement. Conversely, we provide, at best, only a weak echo of these robust programs.

Conservatives welcome this, believing that people are out of work and will only work if they are threatened with draconian poverty. Of course, the happy but still productive workers in places like Finland prove them wrong. The real problem is big business and corporations that have a tax mandate to maximize profits. They achieve this goal by bleeding workers every penny they can while refusing to pay their fair share of taxes (if they pay taxes at all) to advance the common good.

This led to popular unrest and resentment, which our former president took advantage of. But, sadly, rather than uplift working people through policies like Biden is proposing, Trump has chosen to fan the flames of our stifling cultural divisions.

In an unhealthy way, if the Republicans succeed in blocking the Democrats’ agenda to elevate the average Joe, they will win twice by rewarding their big donors while pushing increasingly desperate and angry workers into Trump’s camp. . They will, as they did in the last election, by promising their base the freedom to openly carry assault rifles, keep immigrants out, and ignore regulations they don’t like. not.

This is a recipe not for freedom but for anarchy. However, right under our noses there is a way to increase individual freedom, simply by removing the straitjacket from the way we define work. As Kathi Weeks, a feminist scholar, writes: “I think what you see with people refusing to come back [to work] is a kind of yearning for freedom. …that our society is completely too obsessed with work, that a job is not the only way to find meaning in life and that sometimes no job is better than a bad job.⁠”

Defining our lives solely on how we make money has made us commodities. As author David Frayne writes: “Despite all the propaganda we hear about work as a source of good health and a means to ‘realize potential’, work so often seems to hold people back from realizing what they want. are capable in terms of their creative and cooperative abilities.

The whole notion of what work entails should be broadened to include the work we do taking care of our families, the work we do serving our community, and the work we do to make our world a better place through work. volunteer. To achieve this goal, we need a more generous safety net, like enlightened countries around the world.

A good example is Finland, which was named the happiest place in the world for the fourth consecutive year, based on Gallup World Poll data, which included measures of social support, personal freedom and product gross domestic (GDP).

Let’s start to catch up by passing Biden’s Build Back Better bill.

(Jean Stimmell lives in Northwood. His blog can be accessed online at jeanstimmell.blogspot.com.)